A few years ago, most investors weren’t aware of the scale and speed of innovation in the Life Sciences sector. Many did not even know what “Life Sciences” referred to.

Once-unfathomable breakthroughs in genome sequencing have fundamentally altered the trajectory of the Life Sciences industry, and have arguably changed the course of human history. There have been enormous leaps in understanding our human genetic makeup alongside massive gains in computing power technology. These leaps—combined with robust investment in Life Science R&D, company start-ups, and construction of laboratory/bio-manufacturing space—have ushered-in incredible advances in therapy development and in the treatment and cure of disease. We are living in this era now.

In particular, the arrival of near-instant, commercially-scaled genome sequencing has revolutionized the field. Advances in genome sequencing have been compared to the invention of the microscope, which of course represents another moment in history that changed medicine, healthcare, and science as we know it. For those wondering how exactly the Covid-19 vaccine was delivered to the market in record time with such high efficacy, the answer absolutely starts with genome sequencing.

Capital Hall Partners is active in the space, and we’re grateful to our investors who have joined us in pursuing these opportunities. Our firm is currently engaged in developing R&D labs and biotech/pharmaceutical manufacturing facilities (referred to as Good Manufacturing Process, cGMP) in the Greater Boston area. We currently have over 2 million square feet of Life Science development underway ranging from high-rise R&D labs to cGMP bio-manufacturing facilities. These are exciting times.

We’re seeing over 3 million square feet of excess demand (where the expressed demand for space is greater than available supply) for cGMP facilities and over 4 million square feet of excess demand for Life Science R&D. Life science tenants seeking space in Cambridge are expected to have to wait nearly two years for available space, underscoring the unprecedented demand. Given that 14% of the U.S. pipeline of new drugs are being developed in Massachusetts—and given that Life Science companies want to develop small batch manufacturing plants near existing research facilities—it makes sense that demand is so robust – and expected to grow at exceptional rates.

We do not see this real estate activity as a one-off solely tied to the pandemic. There is increasing talk within the industry of the need to “on-shore” pharmaceutical supply chains and bring back domestic drug manufacturing capabilities. As this sentiment grows—which we’re confident it will—the implications for Life Science and bio-manufacturing real estate are likely to be profound, and long lasting.

As the broad economy embraces the “hybrid work” and remote work models, Life Science and biotech companies are far less able to conduct vital research and development from home. Scientists need to collaborate, and they need labs.

It follows that the concentration of Life Science investment volume as a percentage of total office volume reached a record high of 16.4% in 2020, as nearly $15 billion of fundraising activity and over $10 billion of closed real estate deals was recorded:

According to Newmark Research, “the lack of built and available lab inventory in a handful of top life science submarkets, such is Cambridge and South San Francisco, has accelerated the growth in pricing and rental rates in those markets, and Boston/Cambridge remains the tightest and most institutional life science market in the country, with high-water mark pricing reaching nearly $1,900 PSF. The San Francisco Bay Area and Seattle recorded high-water mark pricing in excess of $1,000 PSF.” 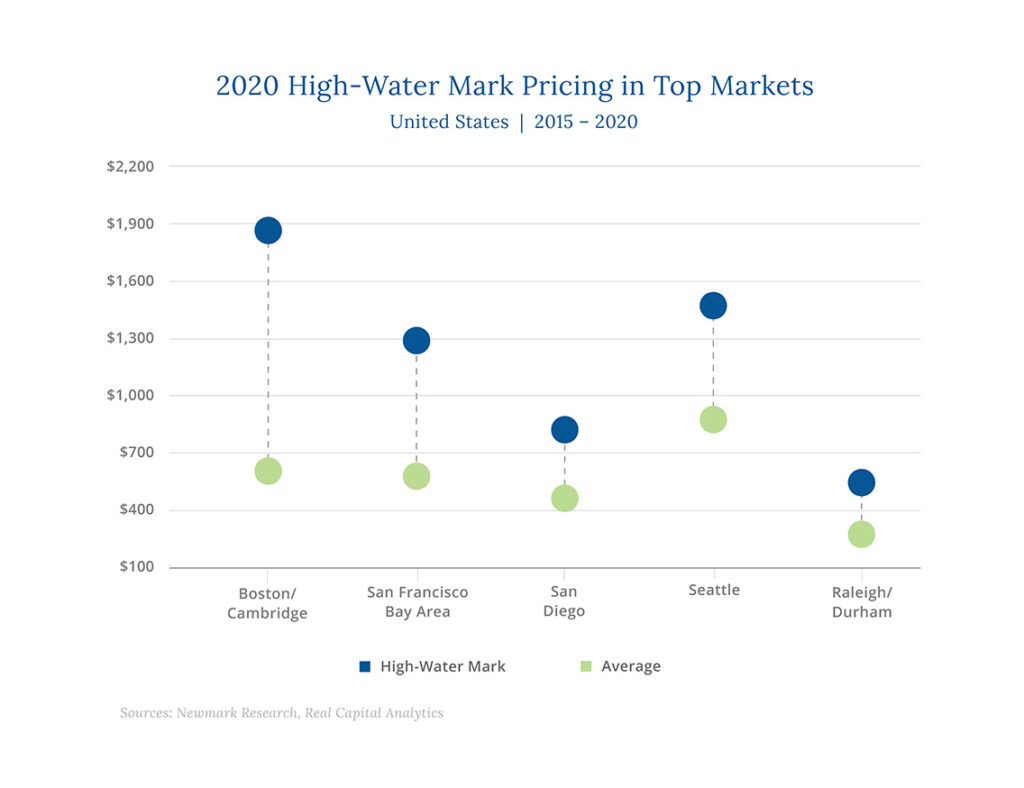 It is also true that the Life Science ecosystem has never received the current levels of funding. Capital is flowing to key markets and shows little sign of abating. Healthcare venture capital funding in the U.S. reached $29.9 billion in 2020, representing a 36.1% increase year-over-year and a cycle high. Globally, life science, drug and medical device companies have raised over $103 million year to date in 2021 – up from $63 billion in 2019. An estimated $87 billion is being directed for life science real estate globally. 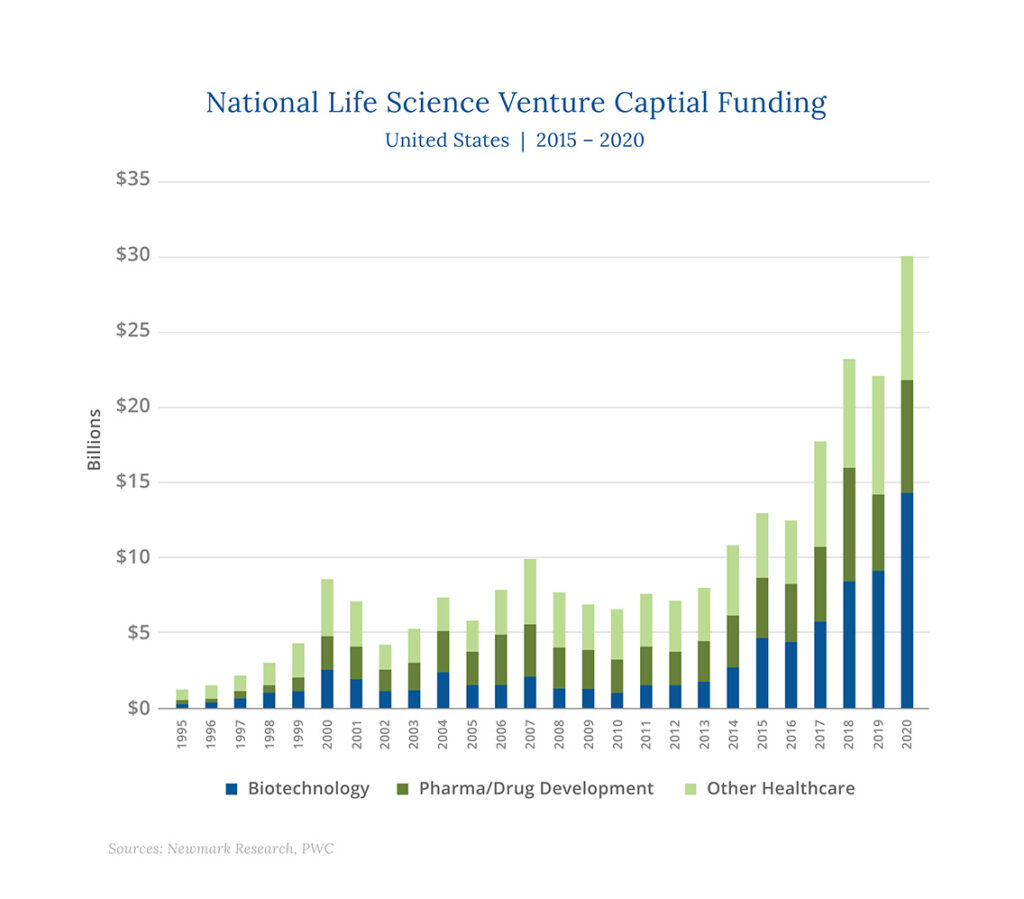 For the Boston/Cambridge market, where Capital Hall Partners is positioned, fund flows have followed a similar pattern to what we’re seeing across the country:

In a world that has been beset by uncertainties over the past year and a half, there is plenty to be optimistic about, in our view. Record-paced investments, real estate growth, and company creation will undoubtedly lead to new therapies and cures for patients around the world, creating increasingly better health outcomes over time. Another critical but less often discussed upshot is purely economic—based on conservative estimates, 20 million new square feet of lab and biomanufacturing space will create demand for up to 40,000 net-new employees by 2024. What’s good for human health can also be good for the economy.

How Medical Breakthroughs are Made: Genome Sequencing

About 20 years ago, scientists had yet to map the complete human genome sequence, but they were desperate to succeed. The Human Genome Project (HGP) was their key.

The success of the HGP has transformed researchers’ ability to easily and quickly read the complete genetic codes of viruses, as well as genetic blueprints for humans, animals, plants, and microbes. Innovation has moved very quickly—gene sequencing that only 20 years ago cost $100,000 per human genome now cost about $600 per genome. And these costs are still falling.

In the public health realm, the efficiency and reduced cost of gene sequencing gave way to a big breakthrough in 2014, with the Ebola virus. Scientists from M.I.T. and Harvard were able to sequence samples of Ebola and use contrasting genetic codes to identify hidden pathways of transmission. This information would ultimately be deployed to slow the spread of the virus, in what is known as genetic surveillance.

More recently, Crispr—which is a technology driven by sequencing—has been giving scientists the potential to fix disease-causing mutations in our genomes. The possibility of analyzing a small amount of blood for DNA markers can open the door for cancer diagnoses, for instance, before symptoms ever appear. We are perhaps only years away from being able to identify a problematic mutation 20+ years in advance of it becoming a serious health issue. According to Harvard geneticist George Church, “one day sensors may be able to ‘sip the air’ so that a genomic app on our phone can tell us if a pathogen is lurking in the room.”

History-making breakthroughs in Covid-19 vaccine development also would not have been possible without gene sequencing. When the virus’s gene sequence was initially mapped and posted publicly, Moderna used the sequence to launch work on the first ever mRNA vaccine. Pharmaceutical companies normally need virus samples to begin tackling the complex problem of developing a vaccine. With gene sequencing, Moderna simply treated the disease as a software problem.

The ability to treat rare diseases is the current and future frontier of gene sequencing. Rapid advancements in computing power and data analytics have drastically reduced the cost of developing treatments, and by 2025 the FDA estimates that 10 to 20 new cell and gene therapy products will arrive each year. In Massachusetts specifically, the drug development pipeline covers a wide array of therapeutic areas: 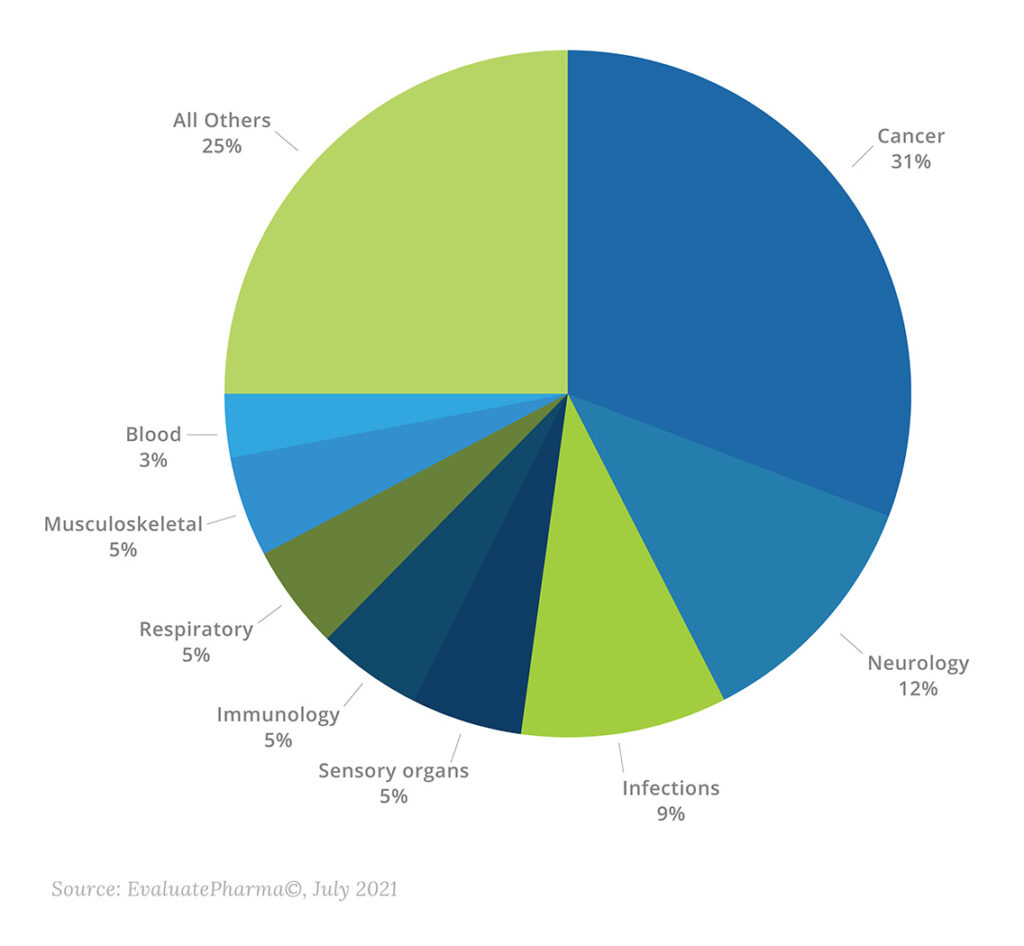 It is possible that gene sequencing will prove to be one of the most important innovations of this century. We may be fast-approaching a time when healthcare consists of a whole genome test, from an early age, that can inform personalized lifestyle and medical plans—customized for us based on our genetic strengths and weaknesses. This idea may seem like science-fiction, but it could just be a few years away.

The Greater Boston area is poised to be close to the center—if not the center—of future innovation and growth in this space. According to Newmark Research, “although Greater Boston’s Life Science market has not been immune to the impacts of the pandemic, fundamentals remain among the strongest in the country. Robust tenant demand, limited building availabilities, and high rents continue to characterize Cambridge, while the outer Boston suburbs continue to expand and capture excess demand.” Capital Hall Partners is excited to be a part of this transformational growth, and we plan to continue expanding our presence in the years ahead.

During this time of Thanksgiving, we wish all our friends, family and investors a peaceful and love-filled holiday. We are grateful for your trust and confidence, and we thank you for investing with us. Together, we are stakeholders in facilitating life-changing research, providing the space and facilities needed to develop medicines and cures for people around the world. We look forward to continued work in the months and years ahead.

Capital Hall Partners is a privately-held real estate investment and development firm. We have over 50 years of experience over multiple real estate cycles, with a current focus on value-oriented investments in Qualified Opportunity Zones in the Los Angeles, Phoenix, & Boston areas. Our commitment to investors is to preserve capital, deliver attractive risk-adjusted returns, be trustworthy and transparent.

If you would like to learn more about Capital Hall Partners, Qualified Opportunity Zones, or our work in Boston, please contact us today at info@caphall.com.