The 2017 Tax Cuts and Jobs Act was the most wide-reaching tax overhaul in years. Most headlines centered around the slashing of the corporate tax rate from 35% to 21%, and S&P 500 companies felt the profit boost immediately – posting double-digit growth in 2018.

But for investors who researched deeper into the provisions of the Tax Cuts and Jobs Act, it became clear that Real Estate was also an asset class with new, favorable tax treatments.

One particular provision in the law—a bipartisan collaboration called the Investing in Opportunity Act—generated few initial headlines but drew the attention of experienced real estate investors. The provision, called the Opportunity Zone (OZ) Program, incentivizes long-term investment in communities of economic need through Qualified Opportunity Zone Funds (QOF). Opportunity zones have the potential not only to help revitalize communities in need, but also to offer preferential tax treatments to investors with a desire to pursue (tax advantaged) returns while also making a positive social impact.

Let’s Start with the Basics: What is an Opportunity Zone?

The IRS defines an opportunity zone as a census tract designated to be “an economically-distressed community where new investments, under certain conditions, may be eligible for preferential tax treatment.”

The concept evolved out of a 2015 paper from the Economic Innovation Group (EIG), a “bipartisan public policy organization that combines innovative research and data-driven advocacy to address America’s most pressing economic challenges.” The paper, called “Unlocking Private Capital to Facilitate Growth,” argues that private sector investment is a critical tool for revitalizing distressed economic areas in the United States, which continue to struggle in the aftermath of the Great Recession. Doing so, says its authors, will ultimately spur job creation and economic opportunity in areas of need.

How Can Investors Participate Directly in Opportunity Zones?

The 2017 Tax Cuts and Jobs Act created substantial incentive for investors to commit capital to opportunity zones. Under the new law, investors can harvest capital gains from existing investments, whether stocks, real estate, or another source, with those gains becoming eligible for preferential tax treatment if invested in a Qualified Opportunity Fund within 180 days from the time of gain recognition.

Once invested, tax on prior gains is deferrable until the earlier of two dates: when an investor sells, or exchanges, the QOF investment; or December 31, 2026. The deferment structure is tiered into 5-year, 7-year, and 10-year periods, with benefits becoming increasingly more attractive the longer the length of the investment:

Investors can also receive non-taxable cash distributions from any refinancing during the hold period. 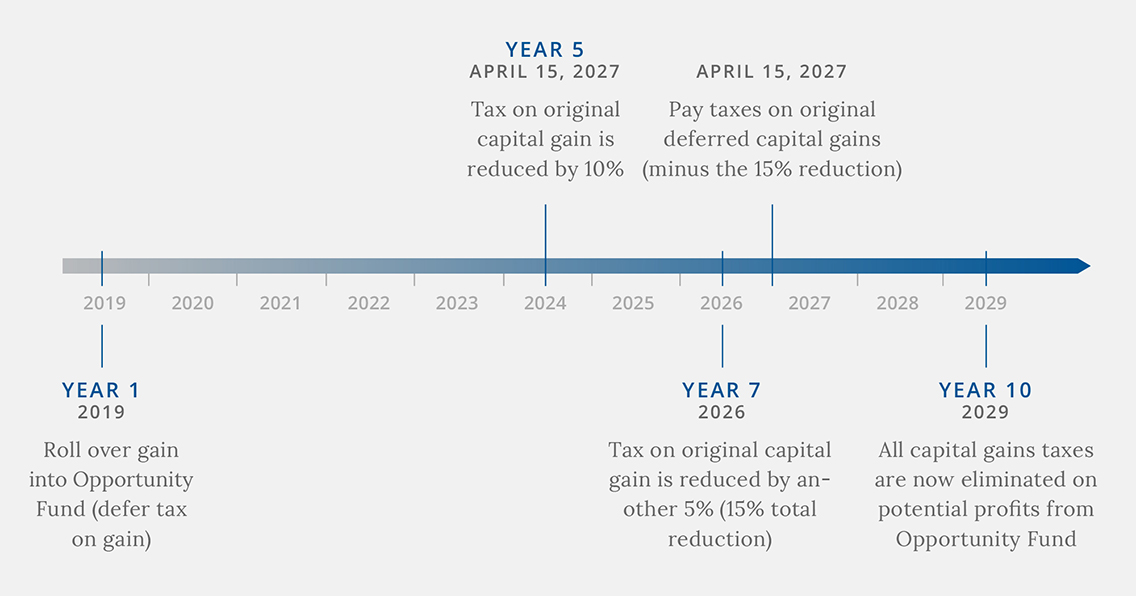 In the hypothetical example below, which uses a 20% capital gain tax rate for the purpose of simplification, a capital gain of $10 million is invested in a traditional real estate investment (left column) vs. an opportunity zone investment (right column). The tax deferrals preserve profit in the OZ program, which generates $6,300,000 over 10 years versus the $4,400,000 profit from the non-OZ real estate deal. QOFs give investors the possibility of achieving attractive, risk-adjusted economic returns enhanced by up to 40% relative to traditional real estate investments.

Finally, QOFs promote socially responsible investing and give investors the chance to make a real impact on communities in need of an economic boost. Capital scarcity is a significant issue in certain areas, both urban and rural. The Economic Innovation Group’s research, which inspired the creation of opportunity zones, found “that 50 million Americans live in economically distressed communities,” which contain “1.4 million fewer jobs in 2016 than they did in 2007” – a clear indication of the gap separating areas of need and communities that were able to recover in the aftermath of the Great Recession.

The result is a nation increasingly reliant on certain geographic areas to create new businesses and jobs while other areas continue to languish. QOFs not only have the potential to create this vital infrastructure in opportunity zones—they can also add auxiliary benefits like improved education, developing additional affordable workforce housing, advancing health care access, expanding nutritional options, and improving the prospects for people in more than 8,700 communities across the United States.

Next Step: How to Approach Opportunity Zones

QOF investments are limited to certain types of property: they must be made in either new construction or major renovations or reuse—and renovations must show substantial improvement within 30 months of construction. Substantial improvement requires a QOF invest an amount equal to the building’s basis of the property plus $1 USD, not including land value. We strictly adhere to a disciplined underwriting process to preserve capital, deliver returns, and maintain compliance with these provisions.

Our QOF investments greatly reduce or eliminate the use of leverage prior to stabilization of the property, allowing for maximum tax benefit capital as quickly as possible. By placing low levels of leverage during development and higher levels once properties stabilize, we can maximize the QOF tax benefits to investors.

Opportunity zones represent a major opportunity for positive social impact through sustainable, long-term investment – a chance for the private sector to contribute capital to low-income neighborhoods and/or communities already demonstrating growth. Combined with attractive tax benefits, QOFs offer tremendous benefits for investors when managed with an experienced, thoughtful, and prudent approach—which is precisely what we strive to provide at Capital Hall Partners.